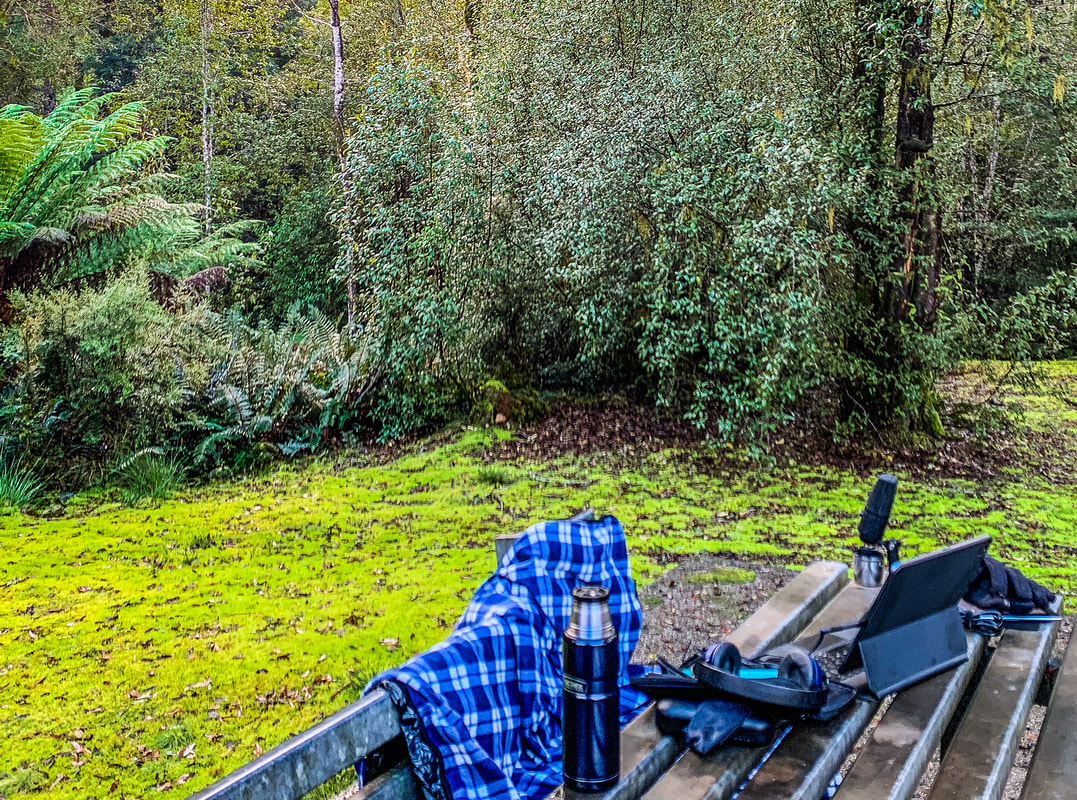 Hello Listener, and welcome to episode no of The Music Labyrinth.  Now, no time for wordy introductions to this episode, for two main reasons.  Firstly, we have a very full music palette for this episode, and I am a little concerned about colouring outside the lines.  And secondly, I wanted to take this moment to explain that the program is pre-recorded this time around and I wanted to welcome you to the heart of the Tarkine rainforest in north west Tasmania where I am recording this.  Its a lovely location and I will post a picture with the show notes on www.themusiclabyrinth.com.  With any luck you might hear the odd element of rainforest ambiance as we go through the program - which we will commence with right now. We commenced this week, as we always do, with the song the ended our last episode of The Music Labyrinth, and that was The Only One, released in 2003 by Danger Mouse & Jemini The Gifted One.  Now that song, The Only One, contains a bunch of samples, and the most obvious of them is also the most obscure.  Have a listen to this, and I will tell you very little about it in a few moments.

Recorded somewhere between 1968 and 1971, and re-released in 2018, that was a song called Loving For The Night by a band called Los Roberts.  I’d love to tell you more about the album and the band but detail is not easy to find.  The only reason we know the original tune was recorded sometime in the late 60s/early 70s is because the re-released album is titled: Los Roberts: Todus Sus Grabaciones en Regal 1968/1971.  So, its a fair assumption that the band, Los Roberts, were Spanish speaking and probably from Mexico, but otherwise, I’ve got nothing.  Which makes a link to our next track a little bit tricky.  So, I’ve assumed that the band, Los Roberts, contained more than one person who’s name was Robert.  And that particular line of logic led me to an a capella vocal group from San Francisco who called themselves The Bobs.  From their 1983 self-titled debut album, here are The Bobs with a song you will recognise.

Here we are in The Music Labyrinth were we last listened to Psycho Killer by The Bobs. Psycho Killer was, of course, originally recorded by Talking Heads in 1977, and has made its way onto the Rock and Roll Hall of Fame’s list of 500 Songs Which Shaped Rock and Roll.  It was written by David Byrne, Tina Weymouth and Chris Frantz.  In 2001 Tina Weymouth and Chris Frantz both contributed to the recording of this next track from the debut album by Gorillaz.  This is 19-2000

Thanks for coming back to The Music Labyrinth, where we most recently listened to a lovely tune.  From her 2021 album Collapsed In Sunbeams, that was Arlo Parks with Hope.  I really like that song.  I think that Arlo Parks’s vocals on it sound a lot like Missy Higgins, and you will have picked up on the line, “We all have scars…” And on that basis I was tempted me to take us to Missy Higgins right now.  However, that’s not happening.  As you know, we do like to keep things simple here at The Music Labyrinth.  That Arlo Parks song was called Hope, and, also called Hope, is this song.

From his year 2000 album Hot Shot, that was Shaggy, together with the artist known sometimes as Prince Mydas and sometimes as Mister Mydas, and that song was called Hope.  Now, it turns out that there is quite a bit I did not know about Shaggy, and one of those things is that, in 2018, he collaborated with Sting for an album called 44/876.  And another is that their collaborative album won a Grammy Award! The album title references the respective international dialling codes for the UK and for Jamaica, the respective home countries of the two artists.  Anyway, from that album, here is the unlikely coupling with Waiting For The Break Of Day.

That was Sting and Shaggy, which is not a brand of mohair, but two well-known musicians (who, apparently, are quite good mates) collaborating on the song Waiting For The Break of Day.  Our new friend Shaggy is big on collaboration.  In 1996, Shaggy hooked up with Maxi Priest for this hit tune.

In The Music Labyrinth we’ve been listening to Shaggy!  Yep - from 1996 that last tune was Maxi Priest and Shaggy with That Girl.  Now, I know that you, The Listener, has a particularly refined taste in and knowledge of music, and will have picked up straight away that That Girl contains a big old sample from this hit instrumental of 1962.

On The Music Labyrinth that was Booker T and the MGs with Green Onions. In 1962 when the track was recorded Booker T Jones was the 18 year old keyboard player for the house band at Stax Records. The band had assembled to record a single called Behave Yourself, and had nothing for the B-side. They started messing around with a 12 bar blues reef which was fortunately recorded and became the tune we just heard. That last minute B-side composition outsold the A-side by a street and and ended up winning a Grammy Hall of Fame Award.  A similar thing happened in 1981 to the German band Kraftwerk when they released a single called Computer Love which had this massive hit as it’s B side.

We are back in The Music Labyrinth where we last heard Das Model by Kraftwerk. Now that we are in the section of the Labyrinth which deals with Kraftwerk I think we are bound by one of the Universal Rules, which obliges us to play this next song.

Welcome back again Dear Listener to The Music Labyrinth.  Earlier we explored in the Shaggy section of the labyrinth, then we popped into the German electronica section.  Now I understand that the German word for Shaggy is “”zottig” and so, when the annuls are written, you will understand when this episode is referred to as the Zottig Deutsche episode.  So lets move on.  You, The Listener, will be quite unsurprised I imagine to learn that not every song released in modern music contains the word Autobahn, but this next one does.  This is a lovely song by The Magnetic Fields called The Dreaming Moon.

From their 1995 album Get Lost ,that was The Magnetic Fields with The Dreaming Moon. Now, as you probably know, I am a music lover who is very much engaged by the lyrics of a song and, being in the same area of the Labyrinth as The Magnetic Fields, we can’t help but pause and listen to these beautiful lyrics.

That was The Magnetic Fields with The Luckiest Guy On The Lower Ease Side.  Stephin Merrit and Claudia Gonson of The Magnetic Fields also form 2/3 of the band Future Bible Heroes.  In 1995 they contributed this next track to the AIDS Benefit Series album Red Hot + Bothered: The Indie Rock Guide To Dating.  This is Future Bible Heroes with Hopeless.

From the AIDS Benefit Series album Red Hot + Bothered: The Indie Rock Guide To Dating, that was Future Bible Heroes with Hopeless.  That compilation album also included this track by Lisa Germano.  This is The Mirror Is Gone.

Here we are in The Music Labyrinth where we last heard Lisa Germano with The Mirror Is Gone.  Lisa Germano is an American singer songwriter and multi instrumentalist with a long pedigree in the music scene. She began her career as a violinist for John Mellencamp.   And, in 1992, she played fiddle on this track by the Indigo Girls.

That was the Indigo Girls from 1992 with Galileo.  Backing vocals on that track were performed by David Crosby and Jackson Browne.  And so, now we are in the Jackson Browne part of town, lets pause on what is probably his second biggest hit.

That song, Running On Empty by Jackson Browne featured in the soundtrack to the movie Forest Gump.  So to did this next track, but not this version of it.  With their cover of the Simon and Garfunkel classic, here are The Lemonheads.

On The Music Labyrinth we last heard The Lemonheads with their 1992 cover of Mrs Robinson.  Evan Dando has been the constant element of The Lemonheads since the band was first conceived.  For a few years in the 1990s Juliana Hatfield was a member of the band, and she and Dando collaborated on a number of other projects.  Their friendship became something of a legend in music circles, so much so that it is said to have inspired a line in this next song.   Keep an ear out for the lyric, "No promises as vague as heaven. No Juliana next to my Evan" as we listen to Jane by Barenaked Ladies.

From their 2015 album No Sad Songs, that was The Lilac Time with She Writes A Symphony.  The band The Lilac Time take their name from a lyric in this next song which goes: Gonna see the river man / Gonna tell him all I can /About the plan for lilac time.  This is Nick Drake with River Man.

This is The Music Labyrinth and we last listened to Nick Drake from his 1969 album Five Leaves Left with River Man.  That song is written in the unusual and slightly tricky 5/4 time signature, and it features the double bass, played by Danny Thompson who, 33 years later, played double bass on this next track.  Yes folks, rest easy - its time for our fortnightly dose of You Know Who!  Here is the man with No Way Out.

Oh, what would the world be like if there was no Peter Gabriel?  It gives me the horrors just thinking about it.  Easing those horrors on this occasion was his song No Way Out from his 2002 album Up.  One of the instruments you heard on that track was the tabla, a dual Indian hand drum, and it was played by the Egyptian percussionist and composer Hossam Ramzy.  And that, Gentle Listener, brings us to the end of episode 77 of The Music Labyrinth.  Now, if you are glancing at the clock and thinking, is he off on an early minute, well, the answer is no.  I’ve chosen a long track, but a good’n to take us over to episode 78.  Before we go there, thanks for joining me on this episode of the program.  Next time around I hope to be live in the studio when we continue our journey through The Music Labyrinth which will start off this this next track.  I mentioned Hossam Ramzy, the tabla player on our last track.  In 1994 Jimmy Page and Robert Plant hatched a plan to re-record a number of old Led Zeppelin tracks in different themes and locations, and with an expanded musical backing to the originals.  Part of that project involved the assembly of an Egyptian orchestra directed by Hossam Ramzy.  In my humble opinion it is their contribution which really lifts this Led Zeppelin classic to an even higher plane than it previously occupied.  This is the mighty Kashmir.  Thanks for listening!